St. Olav and the Olav Ways

There are several Olav Ways in Norway and they all lead to the Nidaros cathedral in Trondheim. The longest, most well-known, and most-walked path is the Gudbrandsdalen path, which runs from Oslo to Trondheim, about 650 km (approx. 400 miles). In the Middle Ages it was an important pilgrim path, and it has become increasingly popular again since 2010.

Between 1993 and 1997, the entire Gudbradsdalen path was marked with signs to help pilgrims find their way. On July 29, 1997, Price Håkon officially opened the St. Olav Way pilgrim path. And in 2010, the Council of Europe designated the St. Olav Ways a “Cultural Heritage Path.”

Olav Haraldsson was a Viking and the King of Norway from 1015 – 1028. He brought Christianity to Norway, where it was not well-received by all of his countrymen. In 1028, he was forced into exile in Sweden. Upon his return to Norway in 1030, he fought his adversaries in the battle at Stiklestad. Olav died in that battle and was revered as a martyr by his followers.

Within a few years after St. Olav’s death, the pilgrim path to Nidaros became as important and well-known as the pilgrim paths to Rome, Jerusalem, and Santiago. With the arrival of the Reformation in Norway in 1537, however, pilgrimages were forbidden. Only in the 20th century did pilgrims begin to make pilgrimages to Nidaros again.

The St. Olav Ways in Norway 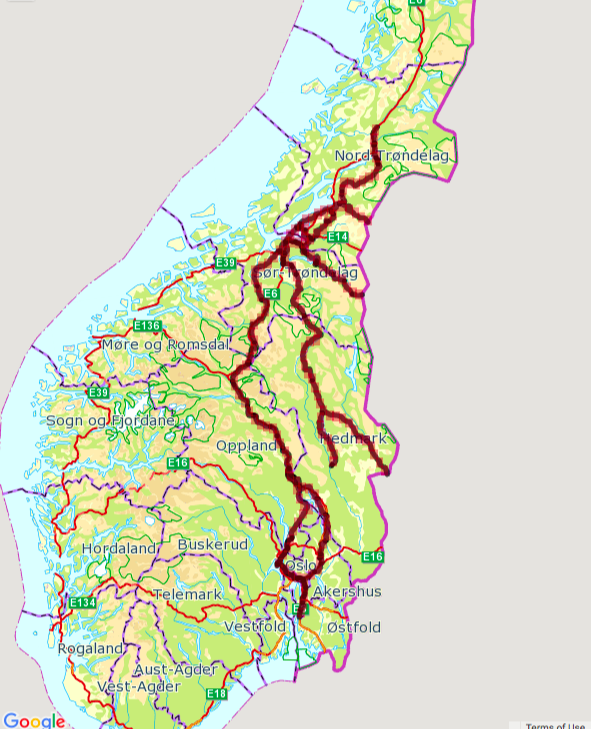 The St. Olav Ways in Norway

St. Olav on the facade of the Nidaros Cathedral in Trondheim